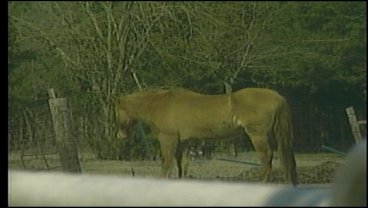 FANNIN COUNTY, TX -- It's a disturbing story with what some might consider disturbing video out of Fannin County. A self proclaimed rescue facility was raided Wednesday by the SPCA. Twenty animals dead out of 64 seized from "Neely's Pet Place."

The owner, Brenda Neely, was arrested. Neely made news two years ago when she stepped up to save dozens of dogs.  Her place, Neely's Pet Place is a self-proclaimed rescue group but now she is in the center of a lengthy animal neglect investigation.

Inside a barn just north of Bonham, the SPCA found twenty dead animals, 17 dogs, two cats and one horse. Officials said some of the carcasses were actually packaged and sprinkled with lime to cut down on the smell. They also found several skeletons of animals including a horse skeleton with the harness still attached. The only way they could describe the scene was absolutely horrible. "Our staff found around 20 deceased animals, we found lime sprinkled on some to cut down the smell.  The smell was so strong, you could smell it about 50 feet from the barn.  Some of the dogs looked like they had died where they laid down. The stench of death on the property today is very disturbing," said Maura Davies of the SPCA.

Forty-four animals were taken alive, but with severe medical problems ranging from mange to being extremely malnourished. Those not only included dogs, cats and horses, but also small mammals (chinchillas, ferrets, a rat), reptiles (lizards, snakes, turtles), and one bird.

The SPCA has been out to the property multiple times to warn the owner. They said she even signed an agreement to improve the animals conditions but never did.  The animals are currently at Perry Animal Care Center in McKinney.  There, they will undergo medical treatment until a custody hearing.  That hearing is set to happen March 4th at the Fannin County Courthouse.