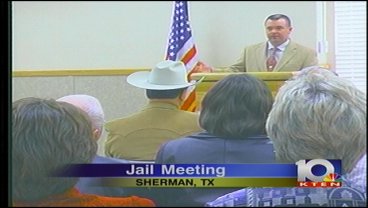 It wasn't the meeting that caught everyone off guard, but the approach that Judge Bynum took. He started by apologizing for his actions and opinions on different aspects of the jail that he says got lost in translation. "I've allowed myself in many cases to let this become emotional and personal and folks, that's not right of me."

The commissioners court along with the sheriff were in the front row when Bynum apologized for the past and talked about the future. In his speech, he announced that he would not call a bond election in May or even November, and that the county would indeed renovate the existing jail piece by piece, paying as it goes. "Obviously privatization didn't go real well and there's a lot of opposition to a bond election coming up in May and that's okay. We heard a lot of good government over the past three years and I'm suggesting that we stay where we are in downtown Sherman, Texas," said Bynum.

Bynum says one of the first things they want to work on at the current jail is the book-in space, and he says the commissioners and sheriff are already discussing the logistics.