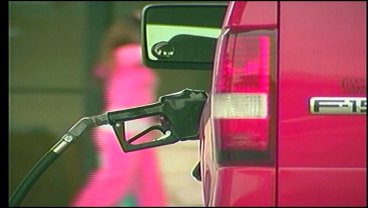 SHERMAN, TX -- Get ready, some predictions put gas back up around that three dollar mark again. Deeda Payton spoke to local residents about the predicted increase.

Getting gas is a chore. You pull up, you get out of your car and you surrender to the price at the pump. "Prices, you never know the next day what they're going to be," said Sherman resident Alonzo Ballard.

You watch the numbers roll by and after a while the clicking noise starts to sound like a cash register. "I remember when it went up to about five dollars a gallon for diesel fuel a year and half ago. That about put me in the poor house."

Recently, gas has been more affordable, but that could soon change. "It's really gona put a dent on some people especially the unemployed who don't have a job," said local resident Marvin Ruffin.

Experts say it's not consumption that is pushing gas prices higher, but rather the price of crude oil. Nationally, gas is averaging about two-dollars sixty-four cents a gallon.  However, if and when prices rise, you can blame it on supply and demand. More summertime travel will equal higher prices at the pump and may put a detour in your summer vacation plans.

According to Triple-A, gas is averaging about two-dollars fifty-one cents a gallon in both Texas and Oklahoma right now, which is less than the national average.