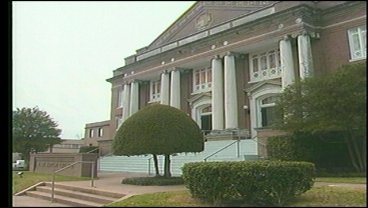 Police say it started in the bathroom at the First Baptist Church downtown. Authorities won't speculate whether the fire was intended to cause serious damage to the church, but the pastor says the fire was set by a juvenile who lit toilet paper in the girl's bathroom. Fortunately, though, church members got the flames out even before firefighters made it across the street to help.

The incident was reported around six o'clock Monday night at the First Baptist Church of Sherman on South Travis Street. The church is directly across the street from the Sherman Fire Department and catty-corner to the police department, so the Fire Marshal says the suspect is either very bold or never realized how close the church is to the authorities. "They're both fire and police are within a couple hundred yards so there's not much thought put into the type incident that happened," said Danny Fuller.

The pastor at First Baptist says the juvenile in question is not a member of the church, and was just visiting with a group for an extracurricular activity.