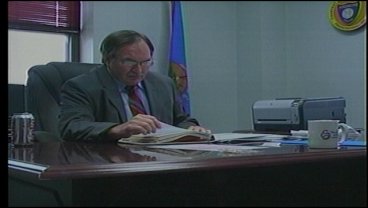 ARDMORE, OK- Ardmore's new chief of police started his first day on the job, Monday.   Meredith Saldana sat down with him and has more on this story.

Chief Keith Mann was busy, Monday, trying to get into the swing of things at the Ardmore Police Department.

But says luckily the Interim Chief of Police, Gary Adams, is hanging around this week bringing Chief Mann, up to speed.

The 33-year veteran of the Oklahoma City Police Department, spent his first day looking over paperwork and getting caught up at department.

He says, Interim Chief Adams is filling him in on what he has learned the last few months at the department.

He tells us, during his first week, he plans on spending time in several different areas of the department.

"I'm going to be in the learning process for some time," says Chief Mann. "And the more time I spend with the officers, ride with them in a car, or whatever it may be, the more I'm going to learn from them."

We asked Chief Mann what his plans are regarding a deputy chief.

He tells us he plans to wait until this summer to name his deputy chief.

If you would like to personally meet Chief Mann and help say thank you and goodbye to Interim Chief Adams, the department will be holding a reception Monday, March 1st, from 2-4pm.

The reception will be on the 3rd floor of the police department.