The Shopping Cart: A Texoma Invention 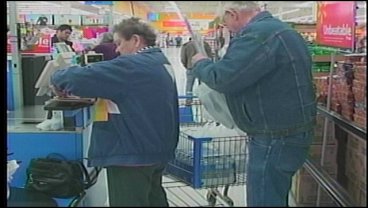 Here's a fun fact! Did you know the first shopping cart was actually invented right here, in Texoma? It was invented in Ardmore!  Meredith Saldana has more on how this invention has changed Texoma.

The year was 1936, Oklahoma native, Sylvan Goldman put wheels on a chair and added a basket.

An idea he had to help make the shopping experience for customers, just a little bit easier.

Today, it's hard to imagine life before shopping carts!

Shopper Yolanda Anderson says, "No, I can't. It's very convenient."

Beverly Baker of Ardmore says, "Yeah, I think people really depend on them."

And Ardmore shoppers were surprised to find out the invention, happened right here in Ardmore, Oklahoma.

Local shopper Ralph Baker says, "Yeah, beats carrying it around with your hands!"

Shopper Barry Harris says, "Yeah, actually I never gave it any thought. Never even thought about that!"

Some people even use them for much more than just transporting groceries.

"Just the convenience of having one," says Beverly Baker. "And a lot of people use it to lean on, you know, for walking. They don't want to get the electric carts, but they get those and lean on them.'

Some residents even remember the days before shopping carts were popular.

Harris says, "If I remember right, we had the first mall right over here at Broadlawn.  And they had a meat market and grocery store and I remember them carrying out groceries to my parents car."

And some say there are disadvantages to the convenient shopping cart.

"I'd rather handle my own stuff, you know but people did have more jobs then," says Harris.

Ralph Baker adds, "The only disadvantage to them is you buy more! The carts are bigger and it takes more to fill them up."

So next time you're pushing a cart, remember that the cart was invented by a Texoman.