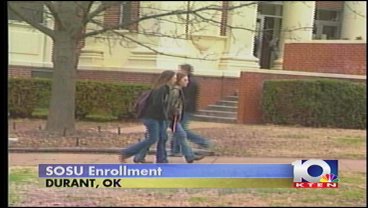 DURANT, OK -- Southeastern Oklahoma State University is growing. Enrollment this semester is the highest it has been in 16 years, and last fall's enrollment was at a 23-year high. Deeda Payton spoke to the university's new president about the recent growth spurt.

The school that celebrates famous alums like Reba McEntire says enrollment for the Spring semester has reached nearly four-thousand students. That's an increase of seven-point-five percent since this time last year, and there are more freshman students enrolled this semester than in the past nine years.

School administrators attribute some of that growth to a tough economy and competitive job market, but they also believe the school's wide variety of courses are fulfilling student's needs. "With the variety of delivery methods we have available all the way from traditional face-to-face instruction to online instruction, you can actually handle more students," said President Larry Minks.

In addition to online education classes, SOSU has partnerships at Grayson County College, the Ardmore Higher Education Center and the Tinker Air Force Base among others, so their students can have more opportunities.