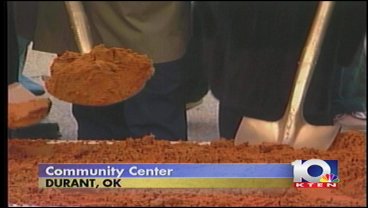 Monday, they gathered at the community center site, but tomorrow is the groundbreaking for the New Eaker Field Airport Terminal.

It was a cold day to be outside turning dirt, but that's just want Durant city leaders did. They picked up shovels and grabbed hard hats to celebrate the groundbreaking of the new Donald W. Reynolds Community Center and Library in the middle of downtown Durant. It's a project that has been years in the making and one that city leaders hope will help move Durant forward. "I think it's a great day in Durant that we've waited for for ten long years to get a new library and community center and it's going to be a great asset to the city of Durant," said City Manager James Dunegan.

"We're excited about the facility in the community this has been a project that has taken a lot of years," said U.S. Congressman Dan Boren. The new community center will be 30-thousand square feet. it will include a large library, black box theater and several meeting rooms.

The community center is set to open in about a year. We'll keep you posted on its progress.