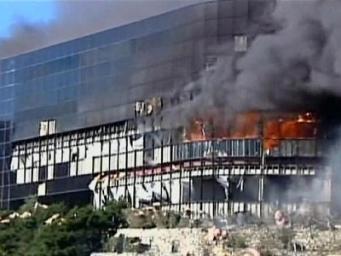 AUSTIN, Texas (AP) - When a man fueled by rage against the U.S. government and its tax code crashes his airplane into a building housing offices of the Internal Revenue Service, is it a criminal
act or an act of terrorism?

For police in Austin, it's a question tied to the potential for public alarm: The building set ablaze by Joseph Stack's suicide flight was still burning Thursday afternoon when officials confidently stood before reporters and said the crash wasn't an act of terrorism.

But others look at Stack's actions and fail to understand how he differs from foreign perpetrators of political violence who are routinely labeled "terrorists."

Says Texas Republican Rep. Michael McCaul, "When you fly an airplane into a federal building to kill people, that's how you define terrorism."