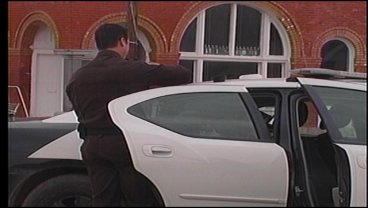 We told you Thursday night, about a manhunt in Johnston County. Friday, Meredith Saldana met with volunteers and law enforcement involved in the search. She has the very latest on this story.

They tell us this is a very serious and possibly dangerous situation.

OHP troopers were out in full force in Johnston County since before dawn, Friday morning, searching for Burkhalter.

"I aint never seen anything like this in this town," says Aaron Bolin, a local resident.

Lt. Danny Morris says, "We had 24 troopers on the ground moving in vehicles. Plus, we've had dogs and also mules for tracking in case we did come up on tracks of the subject. So we could follow him into the woods."

Shortly after, OHP set up a road block with spikes, but Burkhalter drove through them.

His tires eventually blew out just north of Milburn at the Blue River Bridge.

Burkhalter jumped out, ran into the woods and disappeared until early Friday morning.

Lt. Danny Morris tells us, "The last sighting was this morning, (Friday) actually physical sighting was probably around 12:15 to 12:30."

Troopers were then alerted to a signal off Burkhalter's cell phone, showing he was still in the Milburn area.

Local resident Aaron Bolin volunteered to help with the manhunt and tells us he's concerned about Burkhalter being on the run.

"Yes, I have nieces and nephews that go to school here  and I know, I've got a bunch of friends their kids go to school here. So he definitely don't need to be out here with all these kids around."

Law enforcement officials say they don't know if Burkhalter is armed, but they say residents should take precautions.

"Yes, they should stay in their residences. Keep their doors locked, not open them for just anyone," says Lt. Morris.  "Also if they have vehicles sitting outside, make sure they don't leave the keys in it."

Lt. Morris tells me investigators will stay in Johnston County as long as they're receiving leads.

If you know anything about where Burkhalter might be, you're asked to call your local law enforcement.