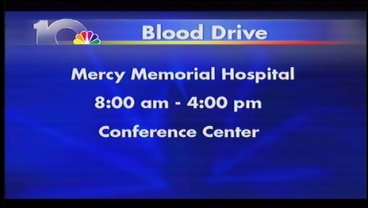 ARDMORE, OK- Talking a life or death situation in Ardmore. Mercy Memorial Hospital, is in desperate need of blood donations. Meredith Saldana has more on how you can help.

It's actually one of Mercy Memorial's own registered nurses who learned first hand how important this blood drive scheduled for Friday is.

A year and a half ago, Terry Douglas' husband, Sam, nearly lost his life.

And probably would have, had it not have been for the Southern Oklahoma Blood Institute.

They serve a 9 county area, going through about 70 units of blood a day, making donations a necessity.

Douglas says, without those donations, she would be a single mother, today.

"My husband had a bleeding ulcer in his stomach and literally almost died, passed out, almost died. Thirty minutes later, they had him in surgery to repair the artery. It required 12 units of whole blood, 2 units of plasma, a unit of platelet. So it's just so incredible, important that people go out and donate."

It's not just the Douglas family you'll help, but countless others.

Friday's blood drive will be at the conference center at Mercy Memorial Hospital.

Remember, you can always drop by your local OBI or the North Texas Regional Blood Center to donate as well.