With Meth Cases on the Rise, Comes Proposal of a Meth Bill - KTEN.com - Texoma news, weather and sports

With Meth Cases on the Rise, Comes Proposal of a Meth Bill 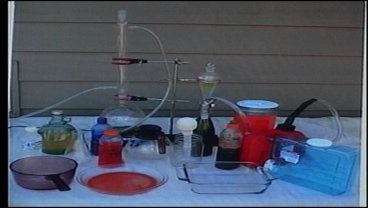 A bill in Oklahoma, is proposing a meth registry similar to the sex offender registry. Meredith Saldana spoke with a recovering meth addict and a narcotics agent to get their thoughts, on the proposed bill.

The Oklahoma Bureau of Narcotics says they're hopeful this new bill will pass.

If it does, anyone convicted of possession, manufacturing or distribution of meth will be prohibited from purchasing and even possessing pseudoephedrine, an ingredient used to make meth.

Narcotics agent, Kevin Norris, says this year alone, meth cases in Ardmore have been on the rise.

"You know, the first 2 months we've seen 5, so if you figure that in we could probably see upwards to 25-30 cases this year," says Norris.

And while he thinks this bill could make a difference, there may be some loop holes.

"I think it will probably deter some, but unless Texas does the same thing then what we're gonna have is people going to Texas," says Norris.  "And they're going to be bringing it up and they're just gonna play the cat and mouse game on whether or not they're going to get caught. Or they're going to have somebody that doesn't have a conviction go get it for them."

"They're still going to be able to talk some people into buying it but it may slow it down to where they have to think about the consequences of if they go into the place to buy the items," says White.  "Because I know that it is actually going to make me think."

But she does believe this bill is headed in the right direction.

"I actually think that's pretty awesome. Because as myself being a meth offender, I feel like that's possibly going to slow the productions down," says White.

OBN says they're also looking into making a public registry that anyone could look up, listing offenders, like White.

The bill still has a little ways to go.

It's set to go before the full house in a couple weeks, then it will be sent to the senate and then on to the governor's desk.