How Reflective Clothing Can Save Your Life - KTEN.com - Texoma news, weather and sports

How Reflective Clothing Can Save Your Life 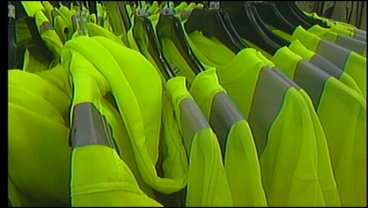 DURANT, OK -- In the past week, two people in North Texas died from simply walking down the road. The first happened in Bonham. The second happened in Van Alstyne. Today, we are looking out for your safety when it comes to walking at dark, dusk and even dawn. Deeda Payton reports on how reflective gear can save your life.

A reflective vest might have saved a 27-year-old Van Alstyne woman who was struck and killed by a pickup truck Wednesday morning around dawn. Authorities say the driver didn't even see her walking until it was too late.

On Monday, an 80-year-old Bonham man was struck and killed by a school bus while walking home from a local Kwik-Check around dawn. Authorities say he too was wearing dark clothing and wasn't seen by the bus driver.

These tragedies have local police and citizens speaking out about ways to walk safely and the importance of not only walking against traffic to be seen but also with reflective clothing or at least bright clothing. "Dawn and dusk seem to be the worst because people don't have their headlights on because they feel they can see enough," said Lt. Carrie Wyrick of Durant P.D. "If you are going to be walking at dark you should not wear dark clothes. I would wear bright colors like these they're not really stylish but it's better to be safe than sorry,"said Jessica Basinger of Orschelins Farm and Home.

Local police want to remind citizens that the same goes for bicycle riders. If you are riding a bicycle you should wear reflective gear and place a reflective sign on your bike