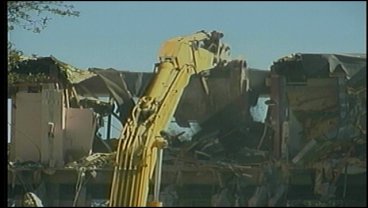 KINGSTON, OK -- A long time fixture in this area, will soon be but a memory. Demolition is underway at the old Lake Texoma Lodge in Kingston to make room for Pointe Vista Development's $750 million resort. Deeda Payton has an update on the project.

Once a vacation spot, it is now a demolition site. The half-a-century old Lake Texoma Lodge in Kingston is being torn apart to make room for a new, multi-million dollar resort. "We started on it in Dec. And the abatement crew finally got done and we started the actual demolition Monday morning," said Steve Miller of Lloyd Neighbors Demolition in Dallas, Texas.

What took years to build, will only take weeks to destroy. "After this...about three weeks...we'll haul off material then put out bids for existing structure demolition," said Ryan Chapman of Pointe Vista Development.

As the walls come crashing down, residents memories come flooding back. Demolition crews say they've had a number of people ask if they can keep a piece of the old lodge to remember it by. "There's rocks and stuff and they'd come and ask if they can have them and I'd just let them have rocks and stuff that they wanted. People have been real nice around here," said Miller.

As Pointe Vista Development explains, this is only the beginning of what's to come on Lake Texoma. "On this side will be home lots, condos, rental property, golf course," said Chapman.

It's out with the old, in with the new. This demolition is the first visible sign of major change taking shape on Lake Texoma and it's all part of the master plan for the Lake Texoma Resort.

Pointe Vista Development hopes to open the new hotel in 2014 which is two years before their contractual deadline.