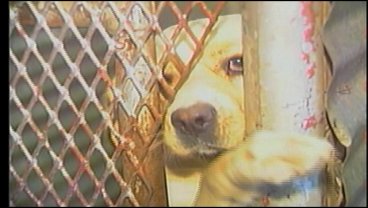 BONHAM, TX -- It's an issue that's been the subject of controversy for years, questions concerning the condition and treatment of animals at the Bonham Animal Shelter. Now, though, the county is working to organize an interlocal agreement between the cities to fund a new county-run animal shelter. Deeda Payton reports on what could be a first step in making that change a reality.

It's no secret that Bonham's animal shelter could use a upgrade, the city will be the first to admit that. But, it's what they've got and they say it's up to code while they explore other options such as a new shelter they would share with the county.

Hundreds of animals are abandoned, lost or turned in to the Bonham Animal Shelter every year. And, hundreds are euthanized because the animals don't find homes in time. That's the reality behind a city pound. "It's hard to adopt sometimes grown animals because most animals we get are grown animals," say Police Chief Mike Bankston.

There are animal rescue organizations, like Rainbow Bridge, in Fannin County that take in homeless dogs and cats, but there isn't room for all of the animals that need rescue. that's why the owner, Thao Allen, is on a committee that has raised $200,000 to build a new no kill shelter in the county. "We are in the final stage of this animal shelter," said Thao Allen.

But to move forward, Allen says they need an interlocal agreement with all the cities, and she says Bonham is balking. "Without the city of Bonham coming on board, it could kill this entire project," said Allen.

City leaders, though, say they know the current pound could use an upgrade and they do support a new shelter, but right now it's all they've got while they crunch numbers and wait on an official interlocal agreement to be drawn up. "The city has agreed to participate in this, $30,000 isn't just laying on somebody's desk. The city is going to have to come up with the money," said Bankston.

Allen says the new shelter will cost about upwards of a $100,000 a year to operate which means $3/capita in Bonham and about a $1.50/person in smaller cities.

Bonham says they aren't saying no to the project. In fact, they are moving forward, but the animal shelter isn't going to be built overnight no matter how much barking they hear about the pound.

The next city council meeting is set for March eighth. We hope to know more about the status of the animal shelter then.

If you are interested in adopting from Bonham City Pound, you can contact the Bonham Police Department at 903-583-2141 to set up a time to look at the animals.

If you would like to adopt from the Rainbow Bridge Rescue Organization, call 903-583-3233.