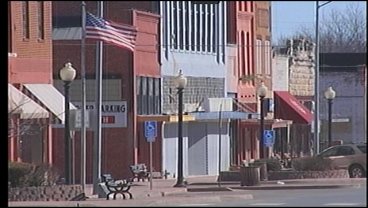 Ardmore, OK - Big money was raised in Ardmore over the weekend at the annual, valentine themed, Chocolate Festival benefiting Ardmore Main Street. Meredith Saldana has more on where this money goes and how it helps.

They are still adding up all the money donated Saturday through silent and live auctions, but they say they're looking at a little over $35,000.

About 170 people attended this year's Chocolate Festival at Heritage Hall.

James Lamey with the Main Street Authority says they plan to put some of the earnings toward two primary projects.

The first being business recruitment, in the last 6 months alone, 12 new businesses have moved downtown.

The second project is to bring green spaces downtown.

You may be thinking the same thing we were, what exactly is a green space?

"Putting in some trees, park areas, things like that for people, says Lamey. "They can either walk through it or it doesn't even have to be a park. It just has to be trees, native grasses, things like that to reduce our carbon footprint."

Some of the money will also be used for smaller annual projects like Christmas lights downtown and maintaining planter beds throughout Main Street.