Woman Who Lost Everything, Delivers Baby On Tornado Anniversary 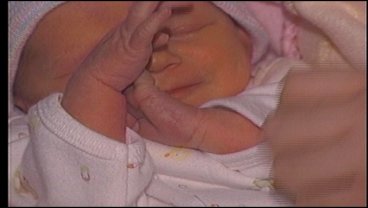 Lone Grove, OK - On the one year anniversary of the Lone Grove tornado we were live at what was formerly the Bar-K trailer park. While we were out there telling the stories of how far those victims of the tornado have come, one woman who lost everything in the tornado, was actually in the hospital that day, in labor with her new baby girl! Meredith Saldana met with her and has more on her story.

Michelle Howell lived in the Bar-K trailer park and lost everything she owned.

Now, she says February 10th, has a whole new meaning.

For the last year, February 10th has been a day that's haunted Michelle Howell.

"After I seen everything, I seen what I lost and what I couldn't gain back and it's just like it took everything from me," says Michelle Howell.

But this year, February 10th took on a whole new meaning.

"I figured I lost everything last year and I gained something this year."

Her friend Brandy Catron also lived in Bar-K trailer park and lost everything.

She says the thought of the anniversary of the tornado on February 10th, terrified her the last few months.

She was even in mental health counseling to help prepare her.

"The only reason why we're still here is because my old man had to beat down the door and reached out in time. We was airborne and he pulled us back in," says Catron. "So it kinda hit us hard that February 10th coming back around again. You know, but when that baby was born that day, I didn't think of it, not one time. Not one time did that tornado cross my mind. I was just so happy."

Now, both Catron and Howell say no amount of therapy could heal them like this little miracle.

"This day was a pretty big thing for us. It was a miracle. We had life come into it," says Katron.  "A good thing happened you know and we've had many nightmares since that day. I mean it's been a struggle a year ago February that day for February 10th. It was bad, it was terrible."

What was such a traumatizing event in Howell's life, now seems so small.

"That's nothing compared to this," says Howell. "She's everything."

As for the future?

Howell says she's still trying to get back on her feet.

"I don't really know exactly what's gonna happen from here on out. I'm gonna try to take care of her as best I can."