OK Soldiers May Be Honored On Local Highways 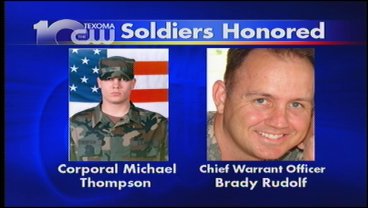 OKLAHOMA - Three local soldiers killed during the War on Terror may soon be honored on Texoma's highways.

Corp. Michael Thompson, Sgt. Clint Williams, and Chief Warrant Officer Brady Rudolf lost their lives during the war. All are from southeastern Oklahoma.

Sen. Jay Paul Gumm (D-OK) is proposing legisltation that would re-name certain portions of area highways, in honor of these three soldiers.

The legislation was approved in committee, and will now go before the Oklahoma Senate.