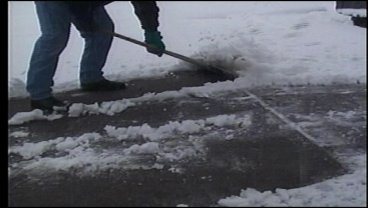 The snow fell fast in Ardmore, Thursday. Within a matter of just a couple hours several inches were already on the ground! Meredith Saldana talked to area residents to find out what they thought of the snow!

Everyone we talked to didn't seem to mind the snow.

Their only concern, of course, was the roads.

Her neighbor, Jacky Baker, says, "It's been a long time since it's snowed like this."

It continued to fall all day.

But drivers say it's not so much the road conditions that are causing problems.

"Some people driving crazy, but me and momma like to take it slow," says Treyon Grant.

Henry Marris adds, "Some pretty much run up behind you driving too fast. Seen some of them drive up and down Commerce, flying down through there."

Some residents told us the heavy snow fall accumulating on the roads doesn't bother them at all.

"I taught in Oklahoma City for years and I drove in a lot worse than this going to school," says Deal.  "So it really doesn't bother me."

But for others, it was stressful.

Some enjoyed it so much they spent the afternoon shoveling their drive ways and even their neighbors!

"Just getting it all out of the way, this stuff's real sticky. I've had this snow shovel for about 10 years and think this is the first time I've ever used it for snow," says Baker.

But over all, everyone seemed to enjoy it!

"It doesn't come around that often and I'd rather have snow than ice anytime," says Baker.