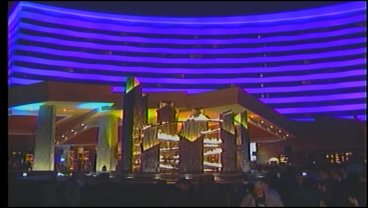 DURANT, OK -- It's the event everyone's talking about, the grand opening of the Choctaw Casino and Resort in Durant.  It was Tuesday night.  Now, locals wait to see what economic impact the facility will have on Texoma.  KTEN's Chris Severy reports.

The new Choctaw Casino and Resort has been years in the making.  We've all watched as the tower went up.  It's a 300-million dollar facility.  Most importantly, it's one where 1800 people work.  The new festivities started with a special party inside the casino.  Visitors mixed and mingled with local, state and Choctaw tribal officials.  After a tribal prayer and speech from Chief Greg Pyle, the hundreds in attendance made their way outside for a ribbon cutting followed by a fireworks show.  Sure the new place is flashy, fun and first class, but most people we talked to couldn't stop talking about just how big a deal this is for our area.  Durant Mayor Jerry Tomlinson said, "The impact that this facility will have, it's gonna draw people not only nationally, but internationally."  Chief Greg Pyle added, "Well, we have 1800 employees on site.  And this is the lowest unemployment in the state of Oklahoma currently.  We just love working for the cities we're in.  And the cities we're in we just try to help that economic development."  The casino and resort have specials all week to celebrate the grand opening.  Anyone headed that direction is also asked to drive with caution in that area of Hwy 69/75 due to increased traffic going to the new facility.