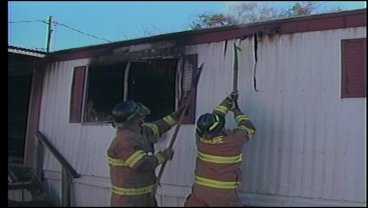 ARDMORE, OK -- Tuesday morning, a fire destroyed a mobile home in Ardmore and officials believe a child may be to blame.

It happened just after 10 am on South Lake Murray Drive.

The mother tells us, she was in the shower when she noticed her kids were being unusually quiet.

She asked them if everything was okay and one of the kids said there was a fire.

She had to rush past the living room that was on fire to grab her newborn baby but everyone did make it out safely.

Firefighters say they believe the fire started from a child playing with a lighter in the living room.

Ardmore firefighter Brian McDaniel, says, "I just kind of want to emphasize how important it is that we have matches and lighters put away high enough that kids can't get to them."

No one was injured.

The home was a total loss.