Surviving the Storm: A Couple's Story of Rebuilding 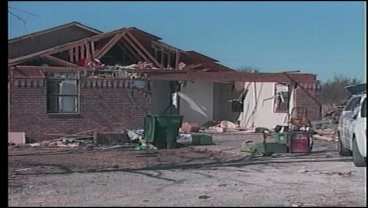 ARDMORE, OK -- It's hard to believe we're coming up on the one year anniversary of last year's deadly tornado. We continue our Surviving the Storm series with an update on a couple we told you about last year. They held onto each other as the tornado destroyed their home in Majestic Hills. Meredith Saldana met with them and has more on their journey to rebuild.

The Jurey's had just a few seconds to take cover and say they feel so blessed to have made it through the tornado safely.

But their home was a total loss.

Here's a look at just how far they've come.

The community of Majestic Hills was hit by the tornado just minutes after it tore through Lone Grove.

Ardmore residents took pictures as the tornado made it's way to the small community.

Dwight and Pat Jurey told us last year, just how terrifying it was.

"Each step you would take you'd thank God that you were still alive," said Dwight Jurey just days after the tornado.

The couple took shelter under their clothes in their closet.

They held onto each other, as the rest of their home was destroyed.

This week, the Jurey's along with some of their neighbors, are putting the finishing touches on their new homes.

"All of us have had this blessing, now, of having new houses and so we're looking at the good things about it and again the community of course is one of those blessings for us, too," says Pat Jurey.

This is the Jurey's first new home.

"Thirty-seven years we've been married and this is our first house that we got to chose everything about," says Dwight Jurey. "We usually buy somebody's house and a custom our lives to this, it is different."

During last year's tornado the Jurey's held each other in their closet for dear life.

When they built their new home they made sure a safe room was built.

Pat Jurey says, "When the house next door had their house totally destroyed but the safe room was still standing, you know, that's where you want to be next time. Even if it never comes again it's the security for us."

The Jurey's say they might actually spend their first night in their new home Wednesday, on the one year anniversary.