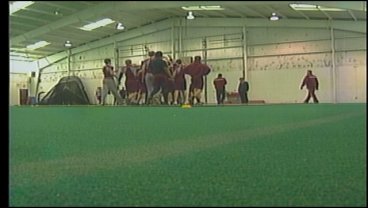 GRAYSON CO., TX - Denison ISD and Sherman ISD have decided to appeal their new UIL district. The two schools are typically going head-to-head on the playing field, but as Katy Blakey explains today they're joining together to go against the UIL.

For the Sherman Bearcats there is no off-season. Players are already preparing for next fall. They just don't know who their opponent will be. Both Sherman and Denison formally appealed the UIL and their new district.

"What we're asking is to trade places with the Rockwall schools," said Dr. Henry Scott, Denison's Superintendent. "And play Richardson, McKinney, Wylie, Highland Park and send them east, right down I-30."

School officials are citing increased transportation costs, but more importantly, travel time to cities 2 to 3 hours away. It would cause a quick turn-around from the final buzzer to first period.

"It makes it hard for our kids on school nights to travel that far and then turn around, do their homework and start the next day," said Sherman coach, Brent Graham. "Time was a big issue."

"It's going to be new," said junior football player, Kyle Crick. "We don't know anyone, we haven't seen any of the other teams."

Still, the players aren't sweating it.

"I really don't care. We just want to play football. We'll be ready for whatever."

But the biggest challenge of all may be the appeals process. When asked if he knew of other North Texas schools that had appealed the UIL and won, Dr. Scott said, "No, but people have won across the state."

Going up against the UIL could very well be the toughest match-up of the year.

Dr. Scott says going up against the UIL is a "long shot," but he and the Sherman superintendent, Dr. Al Hambrick, felt it was the best decision for their students. They'll find out February 22nd if UIL agrees.

The following is a joint press release from both the Denison ISD and Sherman ISD regarding the recent UIL Realignments of the schools into District 13-4A.

TO: ALL GRAYSON COUNTY MEDIA

FROM: DENISON ISD AND SHERMAN ISD

RE: UIL Appeals Committee: Request for Change of District Placement

The school superintendents of Denison and Sherman Independent School Districts have joined hands to appeal last week's UIL realignment of Sherman and Denison into District 13-4A, a placement which would require student travel to schools as far away as Texarkana and Mount Pleasant.

Dr. Henry Scott of Denison and Dr. Al Hambrick of Sherman met Monday to discuss the problems presented by the new changes as well as possible solutions. Both superintendents agreed that the primary problems created by the new alignment involve decreased student time in the classroom and greatly increased time spent traveling. They also agreed that the only solution would be an appeal to the UIL Appeals Committee.

"When traveling to games as far away as Texarkana and Mount Pleasant, our students would have to leave school much earlier to arrive in time for games…and some sports have more than one game per week. That translates into less time in classrooms for our student athletes," said Hambrick. "In recent years, we have traveled to schools in the Frisco and McKinney areas, a situation that was much more reasonable in that our kids could be at most games in a little over an hour, making round trip travel time two to three hours. Under the new alignment, those travel times have basically been tripled or quadrupled."

Scott agreed, adding that mid-week competitions were of special concern. "We're particularly concerned about the games that will require between 2 ½ and 3 ½ hours of mid-week travel time, such as baseball, volleyball, softball, tennis, soccer, girls and boys basketball…and also our JV and freshman football teams," said Scott. "That's five to seven total hours spent traveling to and from these games, putting our kids back home at well past midnight. A lot of kids will be negatively affected by this, not to mention the increased costs for travel. From an academic and student performance standpoint, this is simply not a good situation."

In a letter to the UIL Appeals Committee, Hambrick and Scott suggested moving Denison ISD and Sherman ISD to District 10-4A while moving Rockwall and Rockwall-Heath to District 13-4A. Local school officials say that for the Rockwall schools, trips to Texarkana and Mr. Pleasant could be made on interstate highways with drive times considerably less than those for Denison and Sherman.

"Total round trip drive time from Rockwall to Texarkana is approximately 4 hours and 40 minutes, roughly half the time that will be required of Sherman or Denison to make the trip," said Hambrick. "Similarly, Rockwall's round trip drive-time to and from Mt. Pleasant is estimated at three hours, which is two hours less than the time it would take our buses to make the trip."

Both also mentioned safety as yet another reason for officials to grant the appeal, noting that the creation of a District 13-4A centered around I-30 seems a logical choice since driving conditions and times would be so much better for the districts involved.

"The children of Denison ISD and Sherman ISD deserve the best opportunity available to achieve and succeed in school as a means to a bright future," said Scott. "The demands of balancing studies with sports are daunting at best, but our students work hard to meet their many obligations. We sincerely hope that the UIL Committee will help us ensure that our children are not unnecessarily burdened by changing our district's placement to one that is more conducive to student success."