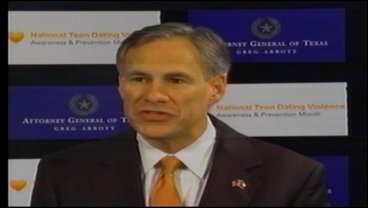 AUSTIN, TX -- A warning for parents about the growing danger of teens sending sexually explicit images and information with their cell phones.  It's a practice called "sexting" and Monday the top law enforcement official in Texas said it can even be a crime.  KTEN's Chris Severy reports.

Texas Attorney General Greg Abbott sent the warning to parents and teens during a visit to the National Teen Dating Abuse Helpline which is based in Austin.  This month is National Teen Dating Violence and Prevention Month.  Attorney General Abbott warned young Texans and their families that sexting can lead to embarrassment, regret and even legal dangers including possible prison time.  Although putting kids behind bars is not the goal.  Abbott said, "What we want to do, however, is to advise all teens about this issue so they will take into their own hands the responsibility of not being involved and sending these sexual images by way of texting."  This advice from Attorney General Abbott.  Before pressing send, teens should consider five tips:

The Attorney General also warned teens that sexting can be a crime.  The owner of a computer or cell phone containing images of nude or semi-nude minors can be investigated and prosecuted for possessing and distributing child pornography charges, which is a felony.  Teens in possession of sexually suggestive images of classmates or companions under 18 face up to 10 years in prison.