Surviving the Storm: Businesses Affected by the Tornado 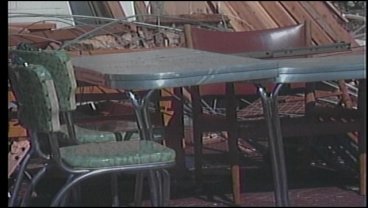 LONE GROVE, OK -- It's hard to believe, we're just 2 days away from the one year anniversary of the tragic Lone Grove tornado. We continue our series, Surviving the Storm, with Meredith Saldana who takes a look at businesses that were affected by the tornado and where they are today.

It's been a long year for some of those business owners who lost everything.

I met with two businesses in Lone Grove to see, one year later, how they were affected by the tornado.

We're just days away from the one year anniversary.

Yet the images from the morning after the deadly tornado still seem so vivid and recent.

As media outlets and onlookers drove into Lone Grove on Highway 70 to see the devastation for themselves, John's Furniture store was the first visible sign of the tornado's destruction.

"When it lightning and we could see my store, we just broke down, we hugged each other," remembers John Talaiferro.  "Like I say, my son was raised in this store and it was home to us. I mean I loved the store. It was just an old building but I mean, you know, there's a lot of footage put around that thing. It was sad."

John Talaiferro has owned the furniture store for 38 years but didn't have insurance when the tornado hit.

The main reason they haven't rebuilt yet.

"We got to where we couldn't even sleep at night. We were worrying about what we was gonna do, you know, but the Lord was it."

The Talaiferro's kids spent their childhood making memories at the family business and in recent years, so did the grand kids.

Talaiferro says one year later, he finds it's those memories he misses the most.

"I still go up there every once in a while and walk around on that old floor up there and think about it you know," says Talaiferro.

Just west on Highway 70 is Lone Grove Feed and Supply.

The business that was previously there was destroyed by the tornado and chose not to rebuild.

But the new business says, after so much devastation, they found some good.

"There has been a lot of blessing in it," says Melba Lee.  "Because new jobs have been created, new homes have been provided for some people that need them and it has really been a blessing for us."

Melba Lee says she continues to witness the outreach of Lone Grove residents to those in need.

A regular customer lost 65 bales of hay in the tornado.

"I heard a gentleman in here the other day say, 'now if you run out you contact me.' You know he is gonna run out, but for a neighbor to say I've got extra. You contact me if you're gonna run out. Is really great," says Lee.