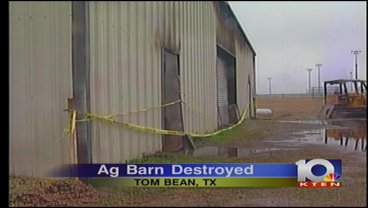 TOM BEAN, TX - Students and school officials are calling it a big loss for Tom Bean. Overnight a fire destroyed the school's ag barn, killing 24 pigs inside and causing thousands of dollars in damage. Katy Blakey has more.

A fixture in Tom Bean is left charred and ruined. From the outside, the Tom Bean High School ag barn looks like it could be saved, but fire crews say there is just too much damage inside.

It's a big loss for the Ag program and the students who's animals died in the fire. Twenty-four pigs were being housed in the building. All belonged to Tom Bean students who were preparing to show them next month at the local livestock show.

"These kids worked with the animals for two to three months," said Tom Bean High School Principal, Roger Ellis. "They come twice a day to feed them. It takes a lot of time and care. It's a loss for them."

Senior Cody Watson says the Ag program is just a way of life for him and many of his classmates. More than 100 students participate in ag classes.

But now many of his students will have to carry on without their animals or a place to house them.

Tom Bean's principal says they hope to rebuild the ag barn and start over. Tom Bean firefighters are still investigating but say there were no signs of the fire being suspicious.