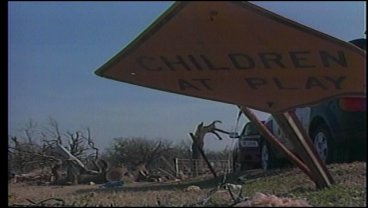 LONE GROVE, OK -- As the one year anniversary approaches, of the tragic tornado that destroyed so many peoples homes and lives last year in Lone Grove, we'll bring you special reports, of how the community has come so far in just one year.  Meredith Saldana has more on the story of a couple who moved back into the trailer park where their home of many years was destroyed last year.

Bill and Janet Cross lost their home and everything in it.

But like so many residents in Lone Grove, they've come a long way.

It's hard to believe it was nearly one year ago that a tornado devastated the city of Lone Grove.

It was a terrifying time, that rocked the small community, bringing the people of Lone Grove closer than ever.

The Cross' left their home just before the tornado tore through their neighborhood at the Bar-K trailer park, destroying their home of more than 15 years.

"Well, when I turned the corner and seen all the red and blue lights about half a mile down the road I knew I was in trouble," says Cross.

Now, almost a year later, what was just acres of debris, is now a thriving community.

With new homes and signs that so many families have picked up the pieces.

The Cross' now have a new home, thanks to their church community, and many friends and it was placed on the same property as their home that was destroyed.

"Well this year's gone by and things are really looking good.  And the Lord has blessed us and we're happy to be back where we are a year later and able to say that we're back home."

But Cross says the tragedy that took place in their neighborhood is something they'll never forget.

"Yeah, we had several in the park that were killed and that's bad you know, it's terrible," says Cross.  "But he (God) also spared a lot of lives so we have to be glad for that."

And for all those who weren't directly affected by the tornado, it served as a reminder.

"I think there are people in the community that were not touched by the tornado, realized how fragile life is.  Just gives you a different outlook."