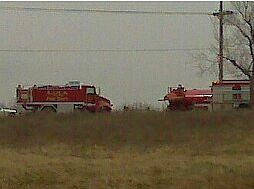 STONEWALL, OK -- The fire in Stonewall that killed a 14-year-old boy yesterday was ruled accidental by the Oklahoma State Fire Marshal's Office.

Joanne Sellars, assistant state fire marshal, said the fire started with a propane heater located near a bed in the living room of the home. The bedding caught on fire, and the family told us young Steven Wright was able to wake his mother and get her out of the home, in which there were no working smoke detectors.

He did not make it out of the home in time.

Neighbors and people in Stonewall heard an explosion as far away as three miles, and the fire marshal said it was an oxygen container from inside the home that became super heated and exploded, sending glass from the many windows of the home flying up to 22 feet away.

The home, built in the 1940s or '50s, had a mostly wood interior, Sellars said, which helped fuel the fire once vented by the blown windows.