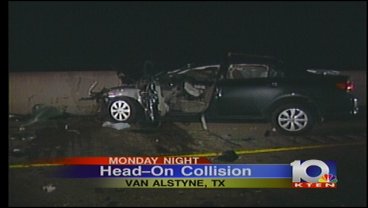 Officer Chuck Milner says Monday night was like nothing he had ever experienced. He'd just gotten back from the office from clearing one wrong-way crash, when he got the call that another erratic driver was heading the wrong-way down Highway 75.

"It's a helpless feeling," said Milner. "You're watching something that's going to end in a bad way."

Monday night Milner watched as a wrong way driver struck and killed a grandmother from Garland. He followed the driver along the service road for about 60 seconds before the collision. He says it felt like forever.

"A million things went through my mind. 'What can I do? What can I do to stop this?' And there was nothing to do."

One caller stating, "I just barely missed him. I hope he hits nobody else."

Another telling dispatchers, "He cut in front of me, but he's doing all sorts of crazy stuff and now he's on the wrong side of the road. I just don't want him to kill anybody."

"I'm sure they were watching and praying this wasn't going to end in a bad way," said Milner. "They were flashing their lights, turning their lights on doing what they could do to alert traffic."

Ultimately, there was nothing anyone could do.

Officer Milner says he believes everything happens for a reason, but he still wonders why this crash happened and if anything could have been done to stop it.

"It's one of those things I hope I never witness again."

The investigation continues into Monday night's deadly crash. Police are still looking into where the suspected drunk driver was coming from that night and if additional charges could be filed.