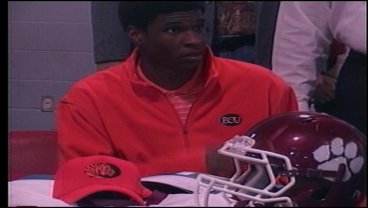 Talking sports, it's National Signing Day, big news for our local athletes and their families. We've traveled around the area from Denison, Sherman, Durant and Ardmore to find out where these athletes will take their talent next. Meredith Saldana has more on the athletes from Ardmore.

All three will be staying here in the sooner state!

The Ardmore High School field house was full of proud families and friends, on hand to show their support for three Ardmore seniors who signed their letters of intent to Tulsa and ECU.

Ardmore tight end, Cody Nall, said he was contacted by D1 and D2 schools but when it came down to it, well his sweatshirt says it all, East Central University was his favorite.

Wednesday, he signed his name on the dotted line and made it official.

"I was really excited. It's been a long drawn out process to finally put that pen to paper," says Nall.  "So it was good."

Ardmore's wide receiver and defensive back, Reuben Tiller, said he had the option of walking on at a division one school, but he too, decided to continue his football career at ECU.

"Just playing at that next level, you know. I always wanted to play football at the next level and now I got that opportunity. So now it's just time to take that next step and make the best of it," says Tiller.

And it wasn't just the football program making news.

But you'll find him next year on the track team at Tulsa!

"Excited, just can't wait till next year comes around," says Minkley. "Something I didn't think would come true, but it did."

Minkley said he chose to stay in Oklahoma so his family could travel to his meets and he won't be so far from home.

And for all you young athletes at home looking up to these guys, Reuben Tiller has some words of advice.

"Anything can happen. No matter how tall you are, how much you weigh, it can happen. Just stick to it and you'll get it done!"

Of course, we want to congratulate all of the athletes who signed and we wish the best of luck next year.