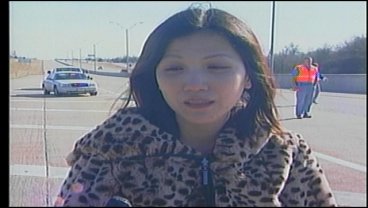 VAN ALSTYNE, TX --A Garland, Texas woman is killed in Van Alstyne in a head-on collision with an accused drunk driver. Tuesday, the victim's two daughters spoke to Deeda Payton at the scene of the crash.

Their mother died on a busy stretch of highway 75 which is now a point of grief and anger for the sisters as Diana Tran explains, "it's very painful to me and to my family. I miss my mom."

Her daughters emotions are raw. The sadness on their faces says what words can not express,"I don't believe she passed at all."

The two walked the scene Tuesday afternoon as police recreated the crash that cut their mother's life short. "Normally, we don't allow this to occur but it is their religion and it gives them time to mourn," said Lt. Tim Barnes of Van Alstyne P.D.

The women are trying to understand how their mother who was headed to Oklahoma to visit her son and grand kids ended up in such a mangled mess and the victim of an accused drunk driver.

Police say Bobbi Elvington was going the wrong way on highway 75 and hit the other car head-on going 70 mph. Authorities say their mother probably never even knew what happened. "Police came to see us and let us know and I don't believe it," said Tran.

Lt. Barnes says officers tried to pull Elvington over, but were too late. "Within one minute of making contact with her a fatality accident occurred right beside his vehicle."

It was the second head-on crash reportedly involving alcohol that happened Monday night. "This road yesterday accidents happened twice and two people were drunk and my mom got killed and I don't want that happening again at all."

Two daughters are sharing their story in the hopes of keeping it from happening to anyone else.

Police say they are still awaiting the results of a toxicology report for Elvington who is facing intoxication manslaughter. We will follow up on this story.