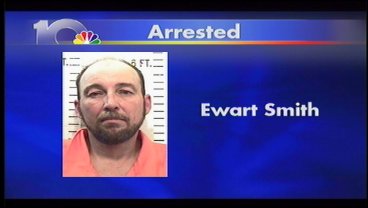 Getting drugs off the streets. A big arrest that could affect the distribution of meth all over Carter County.  Meredith Saldana has more on this arrest and the overall increased number of drug arrests in the area.

The increase comes down to location and opportunity.

Ewart 'Woody' Smith has been wanted since October for failing to appear for a past meth charge.

He has since been on the run but was arrested Tuesday, at a house in Wilson, Oklahoma.

During the investigation, deputies found the items used to manufacture meth and that added even more charges to the list.

We asked Sheriff Ken Grace why drug manufacturing like this is so prevalent in Carter County.

"We just have a lot of rural area where they can cook these things and also we have found several in the municipalities also," says Grace. "I think mostly because of the rural parts.  There's a lot of woods and creeks and lakes where they can sneak off and cook this stuff."

Sheriff Ken Grace tells me 2009 was a record breaking year for narcotics officers in Carter County.

Smith is scheduled appear in court for his initial appearance Wednesday at 1:30.

For now, he remains in the Carter County jail.