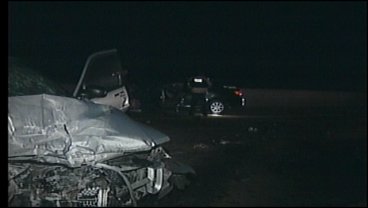 VAN ALSTYNE, TX -- It was breaking news Monday night at ten out of Van Alstyne. Two head-on collisions on highway 75 within an hour of each other. Tuesday, we know one woman died and another is behind bars for Intoxication Manslaughter.

Police say around nine o'clock Monday night, the driver of a Ford Explorer was headed the wrong way down highway 75 from Sherman into Van Alstyne. Officers tried to get her to pull over, but she ended up hitting a Toyota Corrolla head-on at 70 miles per hour. Both drivers were taken to Wilson N. Jones in Sherman with serious injuries. The driver of the Toyota later died. She is a 64-year-old woman from Garland.

44-year-old Bobbi Elvington of Sherman was released from the hospital and booked into the Grayon County Jail for Intoxication Manslaughter.

Before that crash, Van Alstyne police worked a separate head-on collision with very similar circumstances. That accident happened around seven o'clock on highway 75 and County Line Road. Van Alstyne Police say a female driver headed south in the northbound lanes collided head-on with a car headed north. That driver was also taken to Wilson N. Jones. Police told us Tuesday morning that that crash was also alcohol-related and charges are pending.