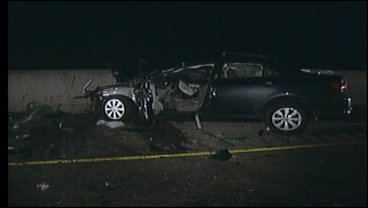 The victim's two daughters drove up from Arlington, Texas to mourn the loss of their mother. They wanted to see for themselves where her life was cut short. They are still in shock and can't understand how this could happen, but want their story to serve as an example to anyone who has ever considered drinking and driving.

Diana Tran and her sister visited the crash site while police continued their investigation. Visibly upset, the sisters walked up and down the highway trying to make sense of how this could have happened.

They say their 64-year-old mother was driving up from Garland, Texas to Oklahoma to visit their brother and her two grandchildren when she was hit head-on by an accused drunk driver. The sisters placed a memorial of flowers in the median where their mother lost her life. "I'm hoping, i'm hoping god will help us please don't let people drink and drive anymore please," said Diana Tran.

"If you're going to have an alcoholic beverage and get behind the wheel intoxicated then this is what can happen," said Lt. Tim Barnes of Van Alstyne P.D. Police say there are no skid marks where the crash happened. The victim was hit head-on at roughly 70 miles an hour. Police suspect she never knew what hit her.

Police are still waiting on the results of a toxicology report on the driver who is facing intoxicated manslaughter.