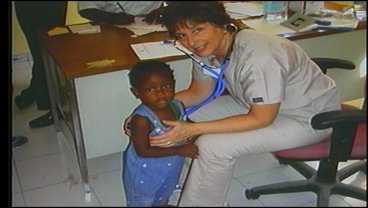 DENISON, TX -- Dr. Jeannine Hatt and Dr. Chuck Phelps are back in Denison after seven days in Haiti. They shared their experiences with Deeda Payton.

It's hard to believe it has been nearly three weeks since the earthquake. Dr. Hatt and Dr. Phelps say you can't really understand the damage and destruction until you talk to the people yourself and see it with your own eyes.

Dr. Jeannine Hatt and Dr. Chuck Phelps flew into the Dominican Republic a week ago Saturday. It was a tough trip, made tougher when they saw the destruction as they crossed the border into Haiti. "It wasn't just a building here and a building there it was everywhere," said Dr. Hatt.

Traveling to Haiti is nothing new for the pair. For years, they have been part of the organization International Childcare, so Haiti has become a second home for them. They travel to Port au Prince about twice a year to work at Grace Children's Hospital. Dr. Phelps says the staff has become their extended family. "Well, we were the first group of International Childcare that had been on campus, and all of those people had been friends of ours for a long time, and we shared the loss of personnel with them."

Their goal on this trip was to reopen the hospital and start treating patients. One of their first patients was a little girl who had been trapped in the rubble for three days. She was rescued and adopted by neighbors. "The family had been killed; they dug her out, and they were just going to take her under their wing."

The earthquake created a number of orphans. There are thousands of babies in cribs outside in the elements, children that the doctors say were not easy to walk away from. "There was a lot of hugging going on, and I felt fortunate that we didn't have two or three Haitian kids coming back with us."

But, Dr. Hatt and Phelps will be back to Haiti. They say there is still so much to be done, and they don't travel to Haiti just to respond, but they go to rebuild and to let the Haitian people know they're not alone in that process.

If you would like to help their organization International Childcare, go to www.internationalchildcare.com