OG&E Hopes to Have All Power Restored By Wednesday Afternoon - KTEN.com - Texoma news, weather and sports

OG&E Hopes to Have All Power Restored By Wednesday Afternoon 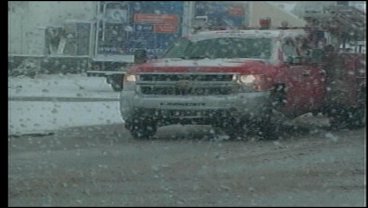 The winter storm that came through last week was to blame for thousands of Oklahoman's left without power over the weekend. Meredith Saldana met with OG&E and has an update on the efforts to restore power.

OG&E in Ardmore tells me they sent all available resources and crews to Pauls Valley and Ada to help get power restored as soon as possible.

And, as of Monday night, most of those residents have their power back on.

Fryer says, Monday night, 90% of Pauls Valley's outages were back up and running as well as 95% of Ada's outages.

Fryer says the reason there are still people without power is mainly because of issues with mud and getting to the locations.

"What we're having to do now, when we get off the pavement of course, is to have a dozer there to pull the line trucks into the locations they can't go due to the mud," says Fryer. "They get stuck so it's easier and quicker to have a bulldozer hooked to them."

Fryer says the Ardmore crews are still assisting in Pauls Valley and Ada and will continue to work until all power is restored.

They hope to have everyone's power back on by Wednesday afternoon.