Kidnapping and Police Standoff Tied Together 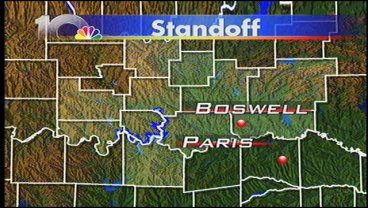 Authorities say a woman was kidnapped and raped Sunday morning near Greenville, TX, but she didn't get away from her captor until the pair reached Boswell, OK.  KTEN's Chris Severy reports.

Around 10:30am Sunday, the man pulled into Pierce's Grocery in Boswell.  He went inside to buy beer, but he was startled by something, dropped the beer and ran outside.  The clerk heard a woman screaming, so she called police.  A woman jumped out of the truck, saying she had been kidnapped and raped.  She was handcuffed and her pants were around her ankles.  She was treated for minor injuries at Choctaw Memorial Hospital.  The man took off in the truck, headed south towards Paris, TX.  A Lamar County deputy tried to pull the truck over, but the driver took off leading DPS troopers, sheriff's deputies and Paris police on a chase.  They threw down spike strips and blew out the truck's tires.  That's when a standoff with police started, just south of Paris on Hwy 19 and County Road 23080.  The Paris Police Department and Lamar County Sheriff's Office won't release information, referring all calls to the Hunt County Sheriff's Office.