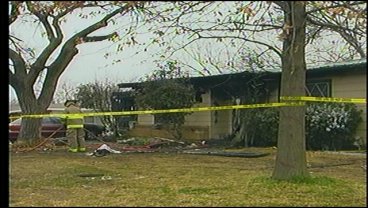 DENISON, TX -- A Denison family is lucky to be alive after their home caught fire early Saturday morning. The family dog didn't make it out in time.

When firefighters arrived at the home on Vandenberg Drive they say the home was fully engulfed. Firefighters checked the home for occupants, but a mom and her son had already crawled out of the front window. The oldest son says he was down the street at a friend's house when it happened. He said their dog, Buddy, did not survive. "My family, we're OK. My mom and my brother they had to go to the hospital because my brother got cut on his stomach, they're OK they're over at a friend's house," said 13-year-old Kyle Allen McIntire.

McIntire said his mom fell asleep with candles burning and woke up to the sound of the smoke alarm. The family says they will seek help from the Red Cross. Their home is a total loss.