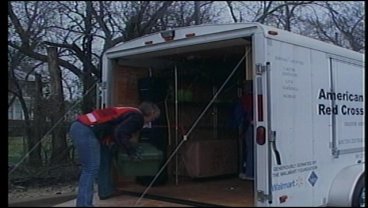 The Red Cross in Ardmore spent the morning packing up supplies to help the city of Duncan, who lost power last night. Meredith Saldana has more on this story.

Because of all of the power outages in Duncan, all of their stores have closed and the Red Cross says they are in desperate need of bottled water.

The ice storms are wreaking havoc on power lines across the state and leaving many people in the cold without power.

Friday, the Lawton Red Cross asked the Ardmore chapter to help them by bringing supplies to help take care of more than 300 people seeking assistance at their shelter.

Pat Whitener with the Red Cross says, "Providing equipment and supplies to them and their shelter that they have opened at the fair grounds in Duncan because of the power outage and the storm."

Volunteer Bob Libby says, "These people have no power, no heat just the idea of helping them keeps me warm."

Volunteers loaded the disaster trailer with cots, blankets, food and water, anything the residents might need until power is restored.

Patricia Whitener did say that they were keeping some equipment and supplies in Ardmore in case the weather worsens here.

The Red Cross says it may take up to a week before power is restored.

So if you would like to help they're asking that you donate bottled water.