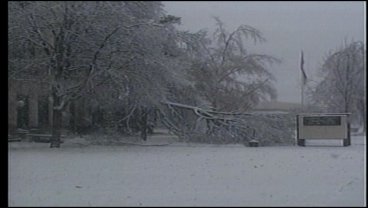 Many cities north of Ardmore were hit the hardest by Friday's storm. Our own Meredith Saldana tracked to Pauls Valley Friday where OG&E is now setting up "Walk up Centers" for folks to report power outages. She has more on this story.

OG&E says they're working hard to get power back on as soon as possible, they even have crews from out of state coming in to help.

Friday morning's wintry mix caused many problems for the city of Pauls Valley.

Tree limbs snapped, power lines were down and many residents like Sheryl Gomez have been without power since 3:30 Thursday afternoon.

So many residents are without power because of the snow.

Luckily for Gomez, although local stores were sold out of generators, a power equipment company from Fort Worth, Texas, set up on the side of the road, gave her hope.

Craig Kennedy says, "We've been doing this for years. We went to Louisiana for the hurricanes and last year Arkansas for the storms. We just try and get down here and help the good people in the cities where they're out of power."

OG&E has also set up a customer walk up center in Paul's Valley in front of Homeland.

Residents or business owners who have lost power can walk up and give the OG&E representatives their information.

Tim Heller with OG&E says, "Some people don't have phone service either so basically we're just here to get the information, name, address and we can get the information to our office and the trouble ticket started, and get everybody going."

Heller says so many residents in the state are without power that crews are coming in to help the sooner state.

Gomez says, "The tree limbs are down.  We tried to get to a neighbors last night to get straw, the trees were across the road and it's just pretty devastating for this area."