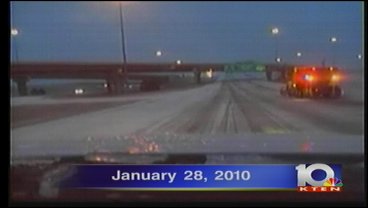 OKLAHOMA CITY (AP) - A winter storm has dumped snow, sleet and freezing rain on Oklahoma and the southern Plains, leading to thousands of power outages, canceled flights at the state's largest airports and the closure of major highways.

Ice accumulations estimated by the National Weather Service at between one-quarter to 1½ inches brought down electrical lines and trees limbs Thursday, knocking out lights and heat to more than 132,000 Oklahoma homes and businesses.

Parts of southern Oklahoma, where freezing rain fell for several hours, appeared to be hardest hit. Altus Emergency management director Lloyd Colston says the entire city was without power, save the hospital and other emergency operations that had generators. Colston says streets are slick and a shelter has been set up for residents.

For latest on power outages reported by OG&E:http://public.oge.com/systemwatch/