Bad Weather Not So Bad for Some - KTEN.com - Texoma news, weather and sports

Bad Weather Not So Bad for Some 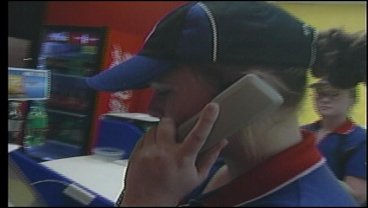 DENISON, TX -- This winter storm not all bad news.  It's actually been a boon to some, especially pizza places that deliver.  KTEN's Chris Severy reports.

This story actually came out of our own need here at the station to figure out what to do for dinner tonight.  None of us wanted to go outside in this rain and wind.  So, we decided to call Domino's delivery.  Seems we weren't alone.  Hand tossed, thin crust and deep dish plus the sandwiches too.  It didn't matter what it was, the phones rang off the hook at the Domino's in Denison.  Store General Manager Mike Rivera said, "Uh, it gets pretty bad here.  You gotta run and make pizzas, cut pizzas and answer the phones.  But we staff pretty good for it.  So, it's not that bad."  Neither rain, sleet nor snow will keep Domino's drivers from heading out to bring dinner to your door.  They're kinda like the post office that way.  Rivera added, "When the ice, when we're expecting the ice, we're usually gonna be pretty busy.  So, we're prepared, ordered extra food and we're ready for it."  The General Manager at the Denison Domino's also says that when the weather gets this bad, business can sometimes be double what a normal night would be.