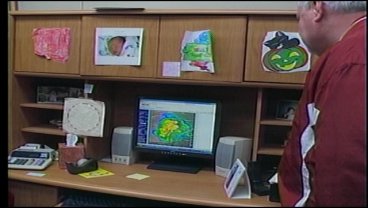 As of Thursday evening, we've lucked out and not seen the icing here in texoma like other parts of Oklahoma and Texas. But as those temperatures drop, cities are preparing for the worst and hoping for the best. Meredith Saldana has more on how the city of Ardmore is gearing up.

While I was at city hall Thursday, Ardmore City Manager JD Spohn made the decision to let all city employees who live outside of Ardmore, start heading home around 3 o'clock this afternoon.

Amber Wilson with Ardmore's Emergency Management said they were watching the radars all morning and afternoon.

She says they were keeping an eye on the freezing line and were keeping in constant contact with Don Olive at the streets department.

Wilson says freezing temperatures and all the precipitation were their biggest concerns.

"Of course the first thing that's gonna start freezing is our power lines and trees and things like that," says Wilson. "So once that starts then we'll know that the streets aren't far behind. So we'll really need to start watching that for traffic."

The Ardmore Street Department will have a crew working all night Friday night to keep an eye on the street conditions, and will be keeping an eye out for possible fallen lines and tree limbs.

Wilson says they're expecting the road conditions to worsen over night.