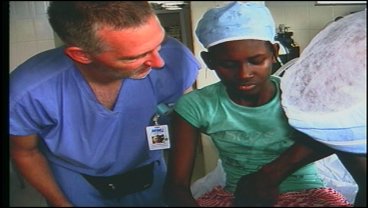 DURANT, OK --We were the first to tell you about a Durant surgeon who traveled to Haiti just four days after the earthquake. Deeda Payton has been in contact with the doctor and his wife through out his journey. Thursday, she sat down with Dr. Peter Hedberg to hear about his experience.

Dr. Hedberg got back on Saturday. In just five days, he saw things that most people will never see. He treated people with ailments that rarely exist in the United States, and he captured most of it on his video camera.

The power of song was a 13-year-old girl's only pain medication as Dr. Peter Hedberg placed pins in her bone to set a fracture. "She was absolutely wonderful."

The girl, like so many, waited in pain for six days to see a doctor, without food, without water, without shelter. "There are so many patients, literally hundreds of thousands of patients that need to be treated," said Dr. Hedberg.

In five days, Dr. Hedberg performed more than 40 procedures in and around Port-au-Prince, the capitol of Haiti. But, even with his best effort, the lack of resources meant he couldn't save them all. "Probably the hardest was an 8-year-old who had a head injury and a chest wound that didn't survive."

Through it all, though, the time he felt the true reality of the fear so many had lived through was when the powerful aftershock hit days later. "I'd call it an earthquake it was very unnerving rumble in the ground, very disorienting at about six a.m. I grabbed my things and ran out of the building along with everybody else."

As we told you that very day, his wife said she was terrified when she heard the news. "I figured he was in an operating room and it collapsed and two hours later I was happy to hear the phone ring," said Leslie Hedberg.

But, putting others needs before his own fear, he went back to work, operating without pain medicine or anesthesia, but to the wide awake faces of people who are just glad to finally be getting help.

Dr. Hedberg plans to return to Haiti in the spring. He says there is still so much that needs to be done.