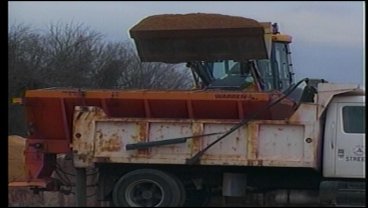 The City of Ardmore started preparing for the ice storm Wednesday morning. Meredith Saldana met with them and has more on what they're expecting.

City employees were out at the public works building getting their sanding trucks ready for the possible ice storm.

Don Olive,  Director of the Streets Department in Ardmore says while we received quite a bit of accumulation over Christmas, the ice we're expecting in the coming days could actually be worse.

He says he likes to make sure his guys and his equipment are ready to go ahead of time, in case they're needed.

"Get in touch with EOC, kind of get an idea of what we've got coming," says Olive. "We try to get our trucks ready, get all the sanders on, make sure they're topped off with fuel, all the equipments got fuel and just prepare. Get ready for the worst, hope for the best."

Olive says he has a shift of guys coming in Thursday morning at 7:30 and if needed, the trucks will already be ready to hit the streets.

He says they won't start sanding until ice starts building up and they'll stay out on the roads as long as they need to.

He says remember to slow down if the roads to get slick.