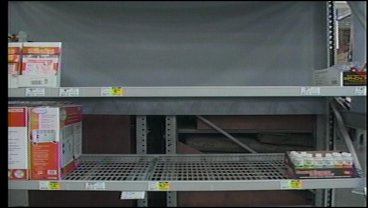 With so many people trying to prepare for the winter weather mix that's expected, some stores are running out of items. Meredith Saldana visited a local store who said heat related items were flying off the shelves, she has more on this story.

It's still hard to believe with Wednesday's sunshine, severe weather with ice, sleet and snow is expected.

But area residents seem to be preparing for the worst.

Lowe's Manager Andrew Kronbeck says, "Last night started the rush it seems like. We had a lot of folks coming in looking for generators."

But by Wednesday morning, shelves that just hours ago were stacked high with generators and kerosene heaters, were instead left empty.

"People have been coming down from Oklahoma City all morning for generators cause in Oklahoma City they've been sold out since last night and we have to send them further south to Sherman," says employee Walt Lee.

Many shoppers were disappointed to find out the store had sold out of generators and kerosene heaters.

Carol Snyder says she and other area residents remember the severe ice storm in 2000.

She says it's memories of that storm and residents left weeks without power that's causing people to make sure they're prepared.

"But you remember when it really iced, snowed, that ice fell? It don't take a whole lot of ice for it to get on the wires and break off and gets on the trees, the limbs will crack and it's a scary thing," says Snyder.  "That's why you kinda prepare for the worst and if the worst doesn't get here then we're better off."

Lowe's says they've called into corporate and asked for an emergency shipment of generators and kerosene heaters.

They hope to get some in Thursday or Friday at the latest.