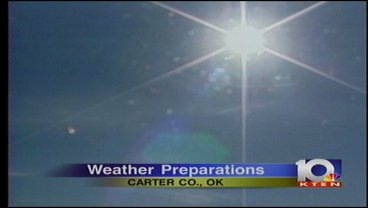 Carter County is also preparing for the winter blast. Meredith Saldana sat down with the county emergency manager there and has the very latest on their preparations.

Emergency Manager, Paul Tucker, says they've already been in contact with the Red Cross and are making sure that if residents end up without power, or in need of a place to stay, they'll be able to refer them to local shelters thru the Red Cross.

With temperatures in the 50's Tuesday in Carter County it's hard to imagine that a winter storm is on its way.

But Emergency Manager, Paul Tucker, says it's something we need to be prepared for.

He says with rains expected just before the deep freeze, we have an increased chance of broken power lines resulting in loss of power.

"Our biggest concern mainly, is power loss and people who require power in their homes," says Tucker.  "You know, home bound people on oxygen or whatever the case may be. Not being able to run their machines to take care of themselves."

He says they frequently post information to keep area residents updated on things like severe weather, shelter locations and other important notices.

Tucker says they'll be in constant contact with the Red Cross as well as the school districts within the county.

He also says before the weather gets bad, be sure to stock up on bottled water, and non-perishable food.

Also, have some kind of back up power supply if you don't have a fireplace to keep your family warm.