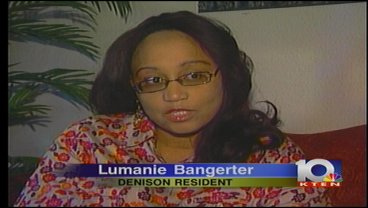 DENISON, TX -- It's hard to believe it's already been two weeks to the day that an earthquake shook Haiti killing at least 150,000 people. Deeda Payton spoke to a Denison resident and Haitian-American about her homeland.

Lumanie Bangerter has been living in Denison for 25 years. She is an American citizen who was raised in Haiti in a town northwest of Port au Prince.

Bangerter comes from a large family. She has eight brothers and sisters, two are still in Haiti and survived the earthquake, but it took her three days to confirm they were alive. However, she does have distant relatives who were killed when their buildings collapsed.

Bangerter wants people to understand that although Haiti is the poorest country in the western hemisphere and has a corrupt government that the people are resilient and hardworking. She says her homeland is a beautiful country and the slums is just one part of the country, it's not all there is.

Bangerter says she plans to travel to Haiti this summer with one the organizations she supports. She says if you would like to donate, she suggest the organization "Healing Hands for Haiti." www.helpinghandsforhaiti.com