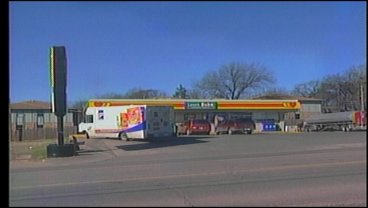 The two women stopped at the Loves store on North First St. to get something to eat.  They went inside the store, but left their car unlocked and running.  They got back in their car and a man popped up from their backseat and put a knife to the passenger's throat.  He demanded money, phones and jewelry.  They gave him what he wanted and he made them drive around for about 15-minutes until a SOSU officer pulled the car over for going the wrong way on a one-way street.  The women hollered at the officer about a man with a knife inside the car.  The man jumped out and ran across the SOSU campus.  A tracking dog was brought in and found the man's scent.  It led police to the Hallie McKinney building on campus, which is unoccupied due to construction.  The suspect, 29-year-old Jodi Ross, was found asleep in one of the rooms and was taken into custody.  According to police, he later admitted to threatening the victims and taking their property.  He was booked on two counts of kidnapping and robbery in the first degree.