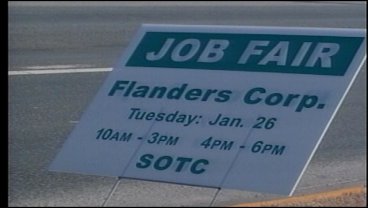 Are you looking for a job in Texoma? A new business in Ardmore will hold a job fair Tuesday and is looking to hire 150 employees. Meredith Saldana has more on what this means for Ardmore.

Wes Stucky at the Ardmore Chamber of Commerce tells me that the new business coming to town and hiring so many people is good news for Ardmore, but doesn't mean we're economically in the clear.

Stucky says Ardmore's unemployment number is currently at about 5.6%, which is less than the state's 6.9% unemployment.

However, there is some good news.

We told you a few weeks ago about Flanders, the new company that's moving into the old Best Buy building just south of Highway 70.

Tuesday, they'll be holding a job fair for anyone interested in a new job.

But Stucky says many people have already sent in resumes.

"Well we have already received 200 resumes that were sent or emailed to Flanders which demonstrates the excitement and also the aggressiveness of people trying to find work," says Stucky.

The company, that makes and distributes air filters, hopes to start production in April.

Stucky did say if you already applied great, but he still says you should try to make it to the job fair to meet the employers face to face.

The job fair starts at 10am and will be held at the Southern Oklahoma Technology Center on Sam Noble Parkway in Ardmore.